The theoretical foundations of the sytemic risk measures we consider are well articulated by Acharya and Richardson (2009) and more importantly by Acharya, Pedersen, Philippon, and  Richardson (2010) and Acharya, Engle and Richardson (2012) who propose (SES) as the shortfall one can expect from an individual financial institution in the midst of a crisis.

The sum of all the individual shortfalls is the total expected shortfall of the financial sector. SES is taken to be sum of two components shown in the equation below:

measures whether the initial leverage

is already too high. z is the initial target level of assets to be maintained by the financial institution. The second term is the expected equity return conditional on the occurrence of the crisis. Given that an actual crisis may not necessarily be available, tail events that we observe during regular times are extrapolated to measure the capital shortfall during an actual crisis.

This second term is the key pointer to which firms will be at risk in the midst of a crisis. Regulators and market participants will be able to either impose policy changes or market discipline respectively on these weak firms which will not be able to withstand a systemic crisis.

The expected equity return component is calculated using three different techniques to determine which will perform better. The first technique is a simple historical estimator proposed by Acharya, Pedersen, Philippon, and Richardson (2010) where tail events are defined to be the worst 5% market outcomes at a daily frequency which is denoted by I5%.

The second technique is based on Brownlees and Engle (2010) who rely on a multistage modeling approach where the bivariate process of firm and market returns are described by MES (the expected equity losses for a firm from a modest decline in overall returns): 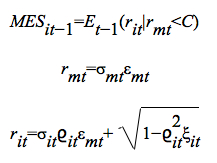 are modeled using asymmetric GARCH while the

is modeled by asymmetric CC.

Brownless and Engle ( 2010) and Acharya, Pedersen, Philipson, and Richardson (2010) propose the use of market data to  estimate systemic risk contributions of firms. One of the key questions is  – How much capital would a firm need if we have another financial crisis?  This could be supplied by taxpayers or spill into the economy with all the externalities that a failure causes. One could estimate for each firm the expected capital shortfall in a future crisis.

As one finds little data on crises, it is necessary to carefully structure the problem. This is done by estimating MES ie  the expected equity losses for a firm from a modest decline in overall returns. From MES, long term MES ( LRMES) that captured the full financial crisis is measured. On this basis, the NYU V-Lab calculates capital shortage based on liabiliites, which is called SRISK.  As equity values fall in a crisis, leverage increases until the firm is in distress. Nominal debt is taken from Bloomberg and changes little over time.  It is from 10-K and 10-Q filings.  SRISK= kD - (1-k)(1-LRMES)E where SRISK is capital shortages based on liabilities and k is a prudential standard ratio of equity to assets = 8%

The IGF reports data generated based on SRISK. The next section intends to proivde the micro-foundation of the studies by Acharya, Pedersen, Philippon, and Richardson  (2010) and Acharya, Engle and Richardson ( 2012).